Due to the increasing use of the railway as a means of transport in the nineteenth century, as well as the common occurrence of railway accidents and compensation claims made by passengers, a growing amount of work was done in the 1860s into the disorders caused by railway travel. This work was led by the medical journal The Lancet, which published an eight-part report on ‘The Influence of Railway Travelling on Public Health’ in 1862. As well as noting the ‘primary’ effects of railway accidents on passengers, such as broken bones, burns, and cuts, they noted a series of ‘secondary’ effects, such as ‘giddiness, loss of memory, pains in the back and head’, ‘tingling and numbness of the extremities, local paralysis, paraplegia, functional lesions of the kidney and bladder’, and ‘slowly ensuing symptoms of intellectual derangement’.

Picture of the crash Charles Dickens was involved in at Staplehurst

These secondary effects can be seen in Charles Dickens, who lost his voice for two weeks after he was involved in a railway accident at Staplehurst in 1865, and who, when writing to his friend Thomas Mitton five days later about the incident said that ‘in writing these scanty words of recollection, I feel the shake and am obliged to stop’.

The cause of these secondary effects was believed to be the nervous system. The discovery of reflex physiology by Marshall Hall in 1833 combined with a conception of the nerves within the body as a kind of biological telegraph system meant that it was thought that shocking external stimuli might resonate around the body without the input of the brain. When this happened, the normal functioning of the organs might be affected. Medical professionals argued that railway accidents might cause a ‘violent concussion of the nervous centres’, and the fact that many survivors complained of back pain led them to believe that the problem lay in the spinal column, which had become hit or jarred. 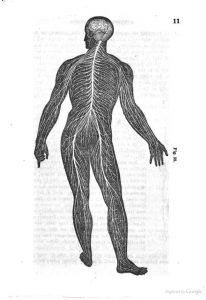 Nineteenth-century drawing of the nervous system by G H Lewes

The most influential person to discuss ‘railway spine’ was John E. Erichsen, an eminent surgeon who frequently served as a medical expert witness in railway compensation cases. He believed that the ‘shakes’, ‘jars’, and ‘blows’ of railway accidents could cause chronic inflammation in the spinal cord and spinal membranes. While he believed that there was a physical cause of the secondary symptoms described by many passengers, he did acknowledge that these might be exacerbated by the psychological shock of being in an accident, commenting on ‘the natural perturbation of mind that must disturb the bravest’ in such circumstances.

In doing so, Erichsen acknowledged that the mind might affect the physical condition of the body and that psychological shocks might have real physical effects. Others, such as Herbert Page, would go on to place more of an emphasis on the role that ‘great fear and alarm’ played in injuries from railway accidents, arguing that fear alone was enough to inflict a severe shock to the nervous system, producing the secondary symptoms listed by so many survivors.  In arguing this, Erichsen and Page paved the way for the work of Freud and his talking cure, as well as later understandings of shell shock which would eventually lead to our modern understanding of post-traumatic stress disorder.

As The Lancet noted, however, accidents were not the only thing about railway travel that made people fear for their health. Their report, they said, was partly written in response to a ’vague dread of certain undefined consequences to health resulting from influences peculiarly produced by this mode of travelling’. Quoting from a speech given by Lord Shaftesbury, they said that many members of the public believed that railway travel created a ‘state of great nervous excitement’ that caused many people who had frequently travelled by railway to be forced to stop. Their aim, then, was to provide the first study of the effects that the use of the railway might have on travellers’ health. 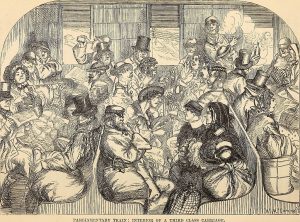 Illustration of a third class carriage in 1859

In the report, the oscillations and vibrations of railway travel are described as producing ‘a series of small regular concussions’ on the body, due to the rigidity of the springs, the roughness of the rails, the centre of gravity of the carriages, and the amount of friction between the wheels and the rails. The degree to which these oscillations and vibrations were felt was said to vary from class to class. In first class the amount of padding on the seats meant that passengers experienced ‘an almost incessant repetition of mere vibrations’ which ‘sway[ed]’ the body’. At the other end of the scale in third class, where the seats had no padding at all, the passengers would experience ‘short, sharp jolts’, causing them to suffer a ‘soreness’ after a long journey similar to that of a bruise. This movement of the train forced the body to constantly tense and relax its muscles, producing a general fatigue. It could also cause the spine to become concussed in much the same way as it might be in an accident, producing the same ill effects.

The fact that the railway brought with it a growing number of people who would commute between the city and their home was said to bring with it its own dangers. The ‘wear and tear’ caused by frequent journeys plus the ‘anxiety and mental pre-occupation’ of knowing that one needed to rise early and hurry to the station was thought to be especially fatiguing on the body and mind. In people with weak constitutions, these effects were believed to be particularly dangerous, with The Lancet commenting that for certain people with ‘unhealthy conditions of the heart’ this added stress had ‘many times proved fatal’.

Railway travel was also described as damaging to the senses. The speed at which trains travelled was thought to ‘severely tr[y]’ the ‘visual powers’ as the retina was forced to focus on quickly passing objects and the brain was required to process these rapid impressions. If a passenger then chose to read while on a train they merely exacerbated the situation. The rattle and noises associated with railway travel was believed to excite the brain through the vibrations of the nerves in the ear.  The combination of sights and sounds, the Lancet stated, frequently caused passengers to suffer from ‘dizziness, headache, sickness, and mental fatigue’.

The combined effect of all of these influences on the body on frequent travellers, The Lancet suggested, was rapid ageing. They quoted from the observations of a physician who had to travel on the Brighton line, who said that he ‘had never seen any say of men so rapidly aged’.

In this eight-part report, the effects of railway travel on the workers received relatively little attention, demonstrating the tendency for concerns about the dangers of the railway to be focused on the passengers. What is said about the workers, however, demonstrates that they were believed to either adapt to their surroundings, so long as they were healthy and started their employment on the railways young, or to embody all of the worst long-term effects of railway travel. According to the journal, in some train drivers ’The nervous system is injured; the persons affected grow thin; the generative power dies out; the body is agitated by starting and convulsions; the intelligence is weakened’. In some there was supposedly also  ‘a notable loss of visual power; the loss of hearing; rheumatic affections’ and ‘dull, continuous, persistent pains accompanied by a remarkable sensation of feebleness and numbness, rendering the acts of walking and standing equally painful’. 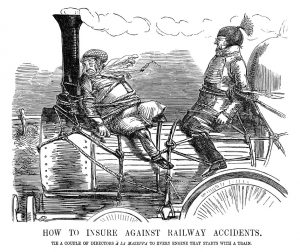 Illustration from Punch magazine in 1853 entitled ‘How to insure against railway accidents’. According to them the solution was to ‘Tie a couple of directors à la mazeppa to every engine that starts with a train’.

This focus on passenger rather than worker safety meant that when legislation did start to be passed it didn’t do much to improve the working situation of ‘railway servants’, as they were called. While in 1871 the Regulation of Railways Act founded the modern inspectorate, empowered to investigate accidents, it wasn’t until 1900 that they were allowed to investigate accidents to staff.

Many of the things we take for granted today about railway travel, such as continuous brakes, guidance on boilers to avoid explosions, block signalling, automatic locking doors, cabs designed to protect the driver in collisions, noise level maximums in driver cabs, and rules for emergency evacuation from trains, were brought about by this inspectorate. The peace of mind we enjoy every time we board a train, whether it is as a passenger or as a worker, is a result of the legislation that started to be passed in the second half of the nineteenth century in response to public concern and reports such as The Lancet’s that forced the railway industry to place health and safety at the top of its agenda.