In 1821, approximately 49% of workers were under the age of 20. In the early nineteenth century, the average age that children started work at was 10, however, in industrial areas many started work at the age of 8 and a half if not younger.  Some of the jobs that children found employment doing from the beginning of the nineteenth century were in factories and textile mills, in coal mines, in households as servants, or as chimney sweeps. 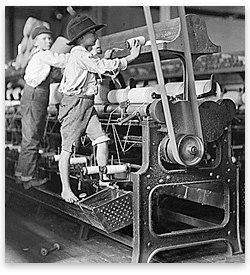 In cotton mills children might start as scavengers, crawling beneath working machinery to clear away dust, dirt and anything else that might cause problems for the mechanism, and to gather any cotton to prevent wastage. Crawling among the moving parts was extremely dangerous, and accidents and fatalities were common. Children might have their hair ripped out, their fingers and arms broken or cut off, their heads squashed, be decapitated, or, if they got stuck, have their entire bodies crushed by the machinery. When they were older and too big to fit below the machines, they might become piecers, working at spinning machines repairing breaks in the thread.

Child labour was used In matchstick factories, were children would be employed to dip wood in a phosphorus concoction, after which they would be dried out, cut into sticks and packaged. The phosphorus in the air would cause the inside of the factory and the workers themselves to glow a blue-green colour. Inhalation of the phosphorus fumes caused inflammation of the lungs. In addition, about 11% of those exposed to phosphorus fumes would develop ‘phossy jaw’, an infection of the mandible that caused the bone to decay, resulting in facial disfigurement and treated by amputation.

There were many other less dangerous jobs types of child labour in factories. For example, after his father went to debtors’ prison in 1824, a 12-year-old Charles Dickens was forced to take a job in Warren’s Blacking Warehouse, where he worked 10-hour days sticking the labels to pots of boot polish. Even in these environments, however, working long hours indoors where they didn’t get enough sunshine to produce the vitamin D necessary for proper bone growth meant that the children employed were likely to develop rickets.

This was also a problem for many children employed to work in coal mines. The darkness underground also caused long-term visual loss. The coal dust and lack of proper ventilation resulted in respiratory problems and in a condition called ‘black lung disease’ . In addition, having to work stooped over in small areas caused some children to develop spinal deformities.

It was mainly girls who were employed as household servants, as there was a servant tax on male domestics. Families with an annual income of £150 would take on a girl of about 13 or 14 as a general maid. In 1891 it was estimated that 1 in 3 women between the ages of 15 and 20 were in domestic service. 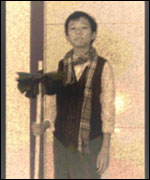 Until 1788 children as young as 4 years old could be put to work as chimney sweeps, and even after the passing of a law in 1840 that made it illegal to allow anyone under the age of 21 to climb a chimney in order to clean it, children continued to be used for this purpose. Chimney sweeps were often orphans, and when they grew too big to be able to crawl through the chimney, at around 9 or 10 years old, they would be put back on the street. In order to prolong the amount of time children could work as chimney sweeps they were frequently underfed by their bosses. The children’s skin would be scraped raw by climbing down the chimney, eventually developing calluses as a result. Falling or getting stuck often resulted in death, and the constant inhalation of soot caused lung damage. This form of child labour was not only cruel, but completely unnecessary as there was no advantage to having a child crawl through the chimney to clean it than to use brushes.

After this a series of laws were passed which gradually raised the minimum age for working and limited the number of hours a day that children could work. In 1844 a law banned all children under 8 from working. Then in 1847 a Factory Act said that women and children could only work 10 hours a day in textile factories. This was then extended to all factories in 1867. 1875 saw a law passed which required all chimney sweeps to be registered with the police, finally putting an end to the practice of using children in this profession. Then in 1878 it became illegal to employ any child under the age of 10.

Alongside these laws that began to reduce the level of child labour, others were passed which increased the amount of education they were entitled to. The 1833 Factory Act required employers to provide 2 hours of schooling every day to all the children in their employ. It wasn’t until 1870 and Forsters Education Act, however, that the state began to take responsibility for education. It decreed that schools would be provided for all children between the ages of 5 and 13 and that the state would pay the fees of the poorest children. In 1880 school was made c 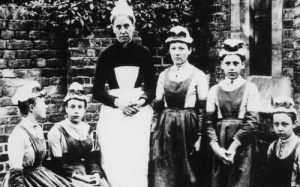 ompulsory for 5 to 10 year olds, however, by the early 1890s only 82% of children in this age group were in school as many families depended on the income their children could provide. Fees for elementary education were abolished in 1891 and from 1899 children were required to go to school until they were 12.

In 1901 it was estimated that 300,000 children worked outside school hours, and it wasn’t until 1918 that labour was restricted to 3 hours a day for children under the age of 14.

When we compare this to our current situation it is easy to see how far we have come. Not only are children required to receive schooling until the age of 16, but children under 13 are generally prohibited from any kind of employment. Children between 13 and 16 are not permitted to work full-time, or to work in places like factories or on construction sites unless this is as part of a work experience. Young people, those between the ages of 16 and 18, must have their own risk assessment done, receive special training, and be supervised by a competent person.

If you currently employ young people, or are considering employing young people, and want to make sure that you are meeting your legal obligations and reducing the level of risk in your workplace as much as possible, give us a call on 0141 244 0181 or visit our consultancy page.