Dust – a seemingly innocuous substance that makes many people sigh as they think about having to get out the feather duster. Yet as several high profile campaigns over the last couple of years – such as IOSH’s No Time to Lose campaign – have highlighted, breathing in many kinds of dust, especially those created by construction, can have serious effects on people’s health. 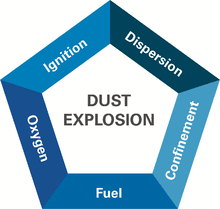 What we tend to think about less is the flammable risk associated with dust. What many people don’t realise is that many of the powders we have in our homes are extremely flammable under the right circumstances. Things like flour, coffee, sugar, cocoa, corn flour, and chilli powder have the potential to cause massive explosions if they are released into the air as a dust and then exposed to an ignition source, such as an open flame, static electricity or even a very hot surface. This is because of each dust particle’s very large surface area compared to its mass, which means that it will burn much faster and catch on fire with much less energy than when the same substance is in a pile. This means that even materials thought of as nonflammable or as slow burning can be extremely flammable in their dust form. It takes as little as 2 grams per cubic foot of air for the household powders listed above to become ignitable.

If combustion occurs in a confined space, the pressure that builds up can cause shockwaves, doing serious structural damage to buildings, and sending objects and debris flying. These explosions can then shake up more dust, causing a second explosion.

While it is unlikely that people will be exposed to these hazards in their homes, in the factories and mills that produce these powders the dangers are very real. It is estimated that 2000 dust explosions occur in factories and refineries a year in Europe. While many of these are relatively minor, throughout history there have been many, at times disastrous, combustible dust explosions.

The first recorded dust explosion was in 1785 in Turin, when flour dust in Giacomelli’s Bakery Warehouse came into contact with a lamp, injuring two employees. Throughout the nineteenth century there were many dust explosions throughout Europe and the United States, several of which completely destroyed the mills they took place in. The most notable was in 1878 in Minnesota, when a buildup of flour in a mill caused an explosion that killed 18 people. The blast was so powerful that limestone blocks were sent flying, and windows in neighbouring towns were broken.

In the early twentieth century, in 1916, a dust explosion at the Quaker Oats Cereal Factory in Petersborough, Ontario killed 23 of the factory’s workers and destroyed the entire building. An explosion of a silo storing 4500 tons of a mixture of ammonium sulphate and ammonium nitrate fertiliser in Germany in 1921 is estimated to have killed between 500 and 600 people and injured 2000 more.

The worst flour mill explosion on record occurred in Westwego, Louisiana in 1977, when a buildup of grain dust came in contact with static electricity. The explosion caused 49 silos to catch fire, killing 36 workers, many from being crushed by the collapsing silos. Building code reforms for grain silos were based off this event.

In 1981, there was a dust explosion at the Bird’s Custard Factory in Banbury. A hopper – a container used to hold particles that have been collected from expelled air – became overfilled, creating a dust cloud of corn flour that ignited due to nearby electrical equipment. The explosion blew the roof off the building and 9 workers were injured. As custard is made when heat and water are added to custard powder, the water from the fire engines that came to put the fire out created gallons of custard inside the building, which then came pouring out.

More recently, in 2008, there was a dust explosion at the Imperial Sugar Refinery in Georgia that killed 13 workers, hospitalising 40 more. The main damage was caused by a second explosion as sugar stirred up by the first explosion ignited, demonstrating the importance of proper housekeeping.

All dust explosions are preventable. Under the Dangerous Substances and Explosive Atmospheres Regulations 2002 (DSEAR) companies are required to:

In a workplace containing potentially flammable atmospheres, employers must make sure that any explosion safety measures are confirmed as being safe by an expert in the field of explosion protection.

Unfortunately, when dust explosions happen it is often due to poor maintenance, deficient housekeeping, inadequate inspection regimes, or because something has been missed in a risk assessment. In all of these situations Amalgamate can help, whether it is by doing hazard identification exercises and hazardous operations reviews to make sure that all potential hazards have been considered and that adequate controls are in place, or by carrying out regular systems audits and site inspections.