The first kind of match invented was called the lucifer match or the ‘strike-anywhere match’. Sir Isaac Holden MP claimed to be the inventor, saying that he demonstrated them in a chemistry lecture he gave in London. One of the men in the audience wrote to his father, who was a chemist, about it and ‘shortly afterward lucifer matches were issued to the world’. 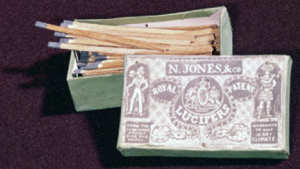 The tip contained white phosphorus, sometimes also called yellow phosphorus, which worked by a chemical reaction whenever the tip was struck and allowed it to be lit when it was struck against anything. White phosphorus, however, is highly toxic and produced a condition called phossy jaw or phosphorus necrosis of the jaw, a kind of bone cancer. In match-making factories, the people who worked as ‘mixers’, ‘dippers’, and ‘boxers’ would be exposed to vapours from the phosphorus. These fumes caused the bones in the jaw – usually the lower jaw – to start to rot. Sufferers would begin by experiencing painful toothaches, the gums would swell, and the infected bone would glow a greenish-white colour in the dark. Pus would start to form, causing tooth loss. Slowly the dead bone would separate from the living bone until the entire jaw bone had necrosed.

The only treatment was to remove the infected jaw, leaving the patient seriously impaired. If this was not done in time, the disease would spread to the brain causing serious brain damage, before causing organ failure and death.

The first case of phossy jaw was reported in Vienna in 1839 by the Austrian physician Lorinsor, who by 1844 reported 22 cases of the condition in match stick workers, establishing that the disease was caused by white phosphorus. By this time, however, the sale of lucifer matches had exploded, with women predominantly working in the factories that made them. By 1890, 60 tonnes of white phosphorus was being used in the match manufacturing industry in Britain. 50% of this was used by Bryant and May, a company established in 1843 at first to import matches but which then began to manufacture them. 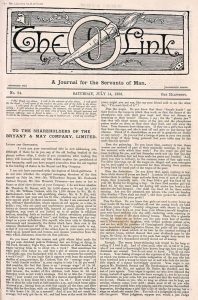 Bryant and May became notorious for their treatment of their workers in 1888 when one of the most famous early instances of industrial action took place – the Match Girls’ Strike. This strike took centre-stage in the British press at the time. It started after the journalist Annie Besant wrote an article for the weekly paper The Link in July 1888 on the working conditions in match factories. In it Besant argued that the women involved in match manufacturing were dying for 4 to 13 shillings a week, with the average salary being 11 shillings and 2 pence per week, and often less due to illegal fines and deductions for materials made on their wages. Besant also noted that the workers ate their food in the same rooms that they were working in, ‘so that the fumes of the phosphorus mix with their poor meal and they eat disease as seasoning for their bread’ When the foremen noticed the swelling of the jaw that was one of the first signs of phossy jaw, she wrote, they sent the worker home and she got ‘no pay during her absence’.

The management of Bryant and May tried to get their workforce to sign a paper contradicting the facts in Besant’s article and after a group of women refused to do so the organiser of the group was dismissed, supposedly for refusing to follow the foreman’s instructions, setting off the strike. Approximately 1400 women and girls refused to work, forming the Matchgirls’ Union and approaching Annie Besant to help them make their demands. Several prominent figures, including George Bernard Shaw and William Stead, the editor of the Pall Mall Gazette, joined the campaign for better working conditions in the factory, with many advocating the boycott of Bryant and May’s lucifer matches, while other newspapers like The Times labelled Besant and the strike’s supporters as agitators and ‘pests of the modern industrialized world’.

After three weeks terms were made and the company announced that it would re-employ the sacked employee, end the fines system, introduce a system so that complaints could be taken to the managers instead of having to go through the foremen, and that food would be eaten in a separate room.

Despite the publicity caused by the strike, white phosphorus continued to be used in Bryant and May’s manufacturing of matches until 1901, and it wasn’t until 1910 that the use of white phosphorus in matches was banned in Britain. 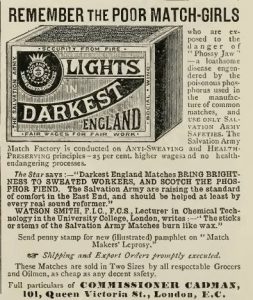 The sad fact is that white phosphorus continued to be used for so long not because there wasn’t an alternative, but because of production costs and consumer demand. Since the 1850s Bryant and May had been importing ‘safety matches’ from Sweden, which used less toxic red phosphorus instead of white and needed to be struck against the side of the box. After 1855 Bryant and May started manufacturing them themselves, but they were not as popular and were far more expensive to produce and therefore more expensive to buy. In 1891 the Salvation Army opened its own factory producing safety matches in an effort to improve the working conditions of match manufacturers, but they continued to use child labour to box the matches to try to keep the costs down so that they could compete, and they still cost three times the price of lucifer matches, so eventually the factory had to close and was taken over by Bryant and May in 1901.