When the Huguenots (Calvinist French Protestants forced to leave France after the Edict of Fontainbleu, which made Protestantism illegal in France) arrived in Britain in the late seventeenth century they brought with them a new method for making felt, and a new occupational disease – erethism, or mad hatter syndrome.

The new method involved the treating of fur from animals such as rabbits, hares and beavers with a diluted solution of mercuric nitrate. The skins were then dried in an oven before being stretched over a bar in a cutting machine. The pelts were then sliced off in thin shreds and layered onto a conical mould, where they would be pressed and shrunk with steam and hot water. The resulting felt could then be dyed and made into fine hats. The method was referred to as carroting as the mercuric nitrate solution turned white fur a reddish brown colour. 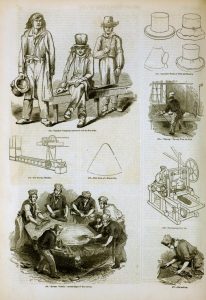 The advantage of this method was that it made the outer stiff hairs on the pelt soft and limp, and twisted and roughened them so that they matted together more easily. The problem was that the treated felt released mercury as a vapour, and felt-making tended to be done in small, confined and poorly ventilated spaces.

As a result, hatters began to present the symptoms of mercury poisoning. These included physical symptoms, such as slurred speech, headaches, weakness and tremors; and neurological problems, such as personality changes – irritability, anxiety, low self-confidence, depression, apathy, and shyness – as well as memory loss, delirium, and hallucinations.

These symptoms were known to be caused by mercury, which had long been prescribed as a cure for syphilis by being rubbed on the skin, injected or taken orally. A night with Venus, it was said, was followed by a lifetime with Mercury. However, there were no laws to regulate the use of mercury in industry, meaning that the symptoms of mercury poisoning in hatters were prevalent enough that the expression ‘mad as a hatter’ emerged in 1829, the same year a report on the syndrome was published in St Petersburg.

In 1860 a report was published in the Transactions of the Medical Society of New Jersey by J. Addison Freeman on ‘Mercurial Disease Among Hatter’s, and in 1869 the French Academy of Medicine also described the health risks associated with hat making. In France this led to a law being passed in 1898 to protect hatters, however in the United States mercury was used in hat making until 1941, despite the fact that in 1888 a new method using hydrochloride was patented. 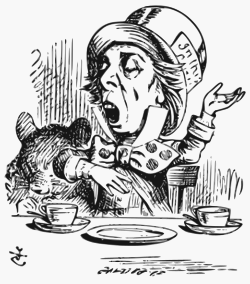 In Britain in the 1890s, factory inspectors began taking note of any deaths and illnesses linked to working with mercury. Their evidence led, in 1899, to mercury poisoning becoming a disease that must be reported under the Factory and Workshop Act of 1895. While the aim had been to try to assess the scale of the danger from exposure to mercury for hat makers and the makers of scientific equipment, the new regulations demonstrated that mercury was used in a wide variety of industries.

In the twentieth century in Britain the problem of mercury poisoning continued to be discussed and investigated, however, little changed in terms of legislation. An article in the medical journal the Lancet in 1912 speculated that the continued use of mercury in hat making may pose a risk to the wearers of felt hats, as ‘a “hat body” may contain as much as 0.138% of mercury’. In 1919 at the International Labour Organisation conference, the question was raised as to whether the use of mercury in hat making should be banned as it had been demonstrated in France that it was not needed. However, the suggestion was not taken any further.

Since the end of the nineteenth century, however, mercury had been used less and less in hat making anyway, and ventilation had significantly improved, meaning that from the beginning of the twentieth century the number of cases reported was low enough that it was never considered a big enough problem to require specific legislation and so it simply remained monitored. From the 1940s hydrogen peroxide became used to create felt instead. 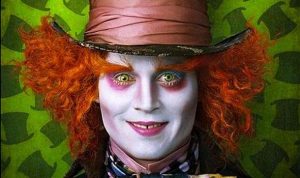 Many have argued that the Mad Hatter in Lewis Carroll’s Alice in Wonderland (1865) is meant to be suffering from mercury poisoning due to his occupation. Others have objected that the Mad Hatter does not demonstrate the shyness and difficulty socially interacting with others that characterised mad hatter syndrome, arguing that the Mad Hatter was based on the real life furniture dealer Theophilus Carter, who was often called the mad hatter due to his eccentric character and the fact that he always wore a top hat. In either case, the strong links between hat making and aberrant behaviour in the nineteenth century are evident.

These associations have been built into many later depictions of Carroll’s character. In Tim Burton’s movie adaptations of Alice in Wonderland (2010) and Through the Looking Glass (2016) the orange marks on the Mad Hatter’s skin and the orange colour of the Mad Hatter’s hair recall the symptoms associated with carroting and Johnny Depp said of his interpretation of the character that he had been ‘poisoned […] and it took effect in all of his nerves. It was coming out through his hair and through his fingernails, through his eyes’.