Staring out the window at the beautiful Scottish countryside on the train to go down to Ayrshire, I was really looking forward to the next three days and my First Aid at Work course. Since starting work at Amalgamate I had realised how little I knew about first aid. Writing articles for our website filled with first aid statistics – like how 59% of people in the UK said that they wouldn’t feel confident enough to try to save a life and 24% said that they would hope for an ambulance to arrive or for a passerby to know first aid – I was really quite worried that in an emergency situation I might be one of those people. By becoming a trained first aider I was going to change that.

The course was in the stunning County Buildings in Ayr. There were 10 of us on the course, some of whom had trained as a first aider before and some of whom, like me, hadn’t. Our trainer was Fiona MacTavish, who as well as being a first aid trainer was a sports physiotherapist for Kilmarnock Football Club and so had regularly had to give first aid to injured players. 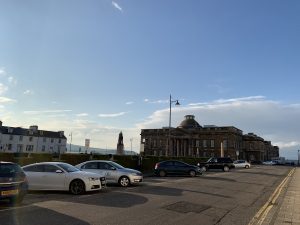 As we covered the material, Fiona shared stories about times when she or past people on the course had had to give or receive first aid, and she encouraged everyone in the room to share examples that they had. This made the course feel really collaborative.

In the afternoon, we had a quiz on the material we had covered so far before putting it all into practice. We practised how to examine someone for injuries, how to put someone in the recovery position, how to help someone who is choking, how to give someone CPR, and how to use an AED.

We used all of the techniques on adult, child and baby mannequins, which was great for all of the people on the course who would be taking on the role of named first aider in schools and nurseries in North Ayrshire after the course. What became apparent was that in all of these situations there are straight-forward steps to follow that any person can use on anyone, no matter the size difference.

Leaving after the first day everyone was saying that they already felt that they had learned so much and they were eager to learn more the next day.

The next morning started with all of us splitting into two teams to practise CPR. We all got a couple of turns to help it to become more natural. Working in teams, we could give each other feedback, and Fiona was always there to give tips and advice if anyone was struggling.

After a short break, we had another quick quiz before doing a bit more theory. We learned about anaphylaxis and allergic reactions, heart attacks, and different kinds of shock.

Then we were straight back up, doing a timed CPR exercise. We were split into two teams of 5 and given an adult and a child mannequin, and told that we needed to work together to give them CPR for 10 minutes – the average time it would take for an ambulance to reach you. At the beginning, 10 minutes didn’t seem like a very long time. By 5 minutes in, it really did. Even giving CPR continuously for a few minutes was really tiring on your arms, so you had to really think about your technique and make sure you were using your body weight.

After a well-earned lunch, we covered how to treat and dress different kinds of injury from a sting or a splinter, to a penetrating wound or a laceration. For each kind of wound we were shown real pictures of what that kind of injury would look like. They weren’t for the squeamish, but they were really helpful in helping us to prepare for the things we might actually have to treat as a trained first aider.

Again, we weren’t sitting down for long, because we then ended the day by practising bandaging each other and putting a partner’s arm into an elevated sling and then a support sling. 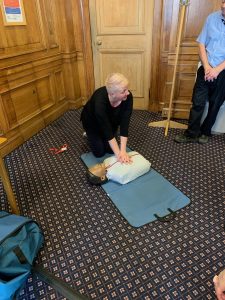 The final day we were thrown straight back in again with another timed exercise. By this point the process felt fairly natural and you could tell that everyone felt a lot more confident.

We had another quiz, and then after a short break we talked about how to treat different kinds of burns, fractures, and sprains and strains, before having another practical session of bandaging and putting an arm into the two different kinds of sling.

This was then immediately put to use in another timed session. This time, we were split into teams of 5 and given a scenario we had to deal with. There had been a car crash and there were multiple casualties. One adult was bleeding, had an ankle injury, a head injury and a possible spinal injury. Another adult and a baby were unconscious and unresponsive.

One of us would need to be the first adult, while two people would have to treat them – one supporting their head and the other bandaging their injuries. That meant that two of us would be left to give CPR to the baby, and give CPR and use the AED on the second adult. To make it more real, one of us had to take charge as the main first aider, giving everyone else roles and constantly checking in to get updates on the situation.

By the end we were all a bit relieved to sit down and do some more theory, this time on concussion and compression, hypothermia, heat exhaustion, and heat stroke, diabetes, seizures, and conditions that might affect children, like meningitis and sickle cell.

We had another timed scenario before lunch, and then it was time for our final assessment. We were all a bit nervous, but once we saw the questions everyone seemed to relax. It was all material that we had covered and been quizzed on repeatedly.

Fiona marked all the papers and then gave us the great news – we had all passed!

Interested in doing one of our first aid courses?

If you like the sound of our first aid courses and would like to know more, check out our first aid page or get in touch. Call us on +44 (0)141 244 0181 or email training@amalgamate-safety.com.