‘Poisoned by the Fluff’: The Dangers of Nineteenth-Century Cotton Manufacturing

In the early 1830s Dr James Phillips Kay exposed cotton as a common killer. After treating many workers from cotton mills, he noticed that many of his patients complained of bad lungs. He wrote that in many of the people he saw, ‘Entrance into the atmosphere of the mill immediately occasions a dry cough, which harasses him considerably in the day, but ceases immediately after he leaves the mills. […] these symptoms become gradually more severe’ until they are ‘harassed by a frequent cough’. He labelled the condition ‘spinners’ phthisis’ – phthisis being the common term used for pulmonary tuberculosis – and noted that if the condition was allowed to progress it could be fatal. 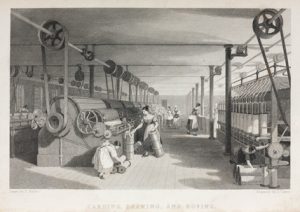 Drawing of the inside of a cotton mill

The cause of the disease was highlighted in Elizabeth Gaskell’s 1855 novel North and South, in which Bessy Higgins, a nineteen-year-old worker in a cotton mill dies from the condition. As she explains, the manufacture of cotton released ‘Fluff. […] Little bits as fly off fro’ the cotton, when they’re carding it, and fill the air till it looks all fine white dust. They say it winds round the lungs, and tightens them up’.  Carding was the process in cotton mills in which the raw cotton fibres were fed through machines to disentangle and clean them. Working in this environment, she says, leads many people to fall ‘into a waste, coughing and spitting blood, because they’re just poisoned by the fluff’.

While the 1802 Health and Morals of Apprentices Act had required that mills and factories have sufficient windows for proper ventilation, the reason for this had been to reduce bad smells in the working environment, not to try to remove harmful fibres from the air. This was because at the time diseases were believed to be transmitted by miasmata: decomposed material found in foul-smelling air, dirty water, and unhygienic living conditions. It was not until the Factory and Workshop Act of 1878 that it was stipulated that ventilation needed to be adequate ‘to render harmless, so far as is practicable, all the gases, vapours, dust, or other impurities generated in the course of the manufacturing process or handicraft carried on therein that may be injurious to health’. As a result, in the 1850s when Gaskell was writing, despite there being an association between lung conditions and working in cotton mills, it was up to the factory owner to decide if they would take any measures to protect the health of their workers. Some cotton mill owners would install a fan at one end of the carding room to carry off the cotton dust, but many chose not to as it was a large expense that brought in no profit. This meant that, as an article in the medical journal the Lancet noted in 1863, ‘A carder seldom lives in a cardroom beyond forty years of age. Many have to give up working much younger’.

As Gaskell’s novel demonstrates, however, it was not always only the factory owners who did not want fans to be installed. As was the case with other measures to improve health and safety in the nineteenth century – such as the reduction of working hours for women and children brought about under the Factory Act of 1833 – the workers in cotton mills themselves were at times resistant to the installation of fans. As Bessy Higgins explains, some workers complained of hunger as a result of the improved ventilation, arguing that ‘they’d been long used to swallowing fluff’ and ‘that their wage ought to be raised if they were to work in such places’. Such statements reveal the desperate conditions the working classes were living in at this time, which caused efforts to improve their working conditions to seem like threats to their survival.

While it is impossible to know the numbers of people who died in the nineteenth century from the inhalation of cotton, it is possible to get an idea of how many people were exposed to these risks. In Friedrich Engels The Condition of the Working-Class in England in 1844, he states that in 1834 ‘nearly a million and a half human beings’ worked in the cotton industry, and that by the time he was writing ‘it may be safely assumed that […] the number of workers is greater by one-half than it was in 1834’. A study in 1908 into the health of men working in cotton manufacturing in Blackburn found that 73.8% of them complained of suffering from asthmatic symptoms from inhaling dust. 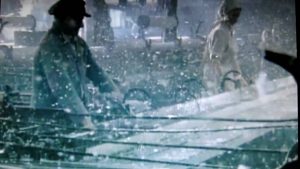 Spinners’s phthisis would later become known as byssinosis (from byssus, the Latin for cotton) and was recognised as an industrial disease under the National Insurance (Industrial Injuries) Act 1946. Nevertheless, a study in 1948 by the Department of Health at Manchester University found that a substantial number of Lancashire workers involved in the blowing and carding rooms in cotton mills still suffered from the disease. Out of 103 men with at least 10 years of exposure to cotton dust, they found that 52% had symptoms of early byssinosis, and 10% had reached the third stage of disabling byssinosis. Recent studies into byssinosis have shown that it is linked to both an acute fall in ventilatory function, which is reversible by removal from the dusty environment, and an irreversible, chronic kind of industrial bronchitis.

Despite the fact that people were becoming aware of the dangers posed by the breathing in of harmful substances almost two centuries ago we still have a long way to go in eliminating this occupational health risk. The exact pathology of byssinosis is still not entirely understood, meaning that efforts to reduce the occurrence of the disease continue to depend on removing dust from the work environment in cotton mills.  Such efforts have involved fitting exhausts to the stripping brushes in carding machines, installing air conditioning, and ensuring that work spaces are regularly vacuum cleaned, as well as applying an oil emulsion to raw cotton to prevent it from releasing as much dust. Continued investigation into whether it is, as many medical authorities now believe, some foreign matter in cotton – such as stems, leaves, or bacteria – that cause byssinosis, and whether certain people are particularly susceptible to the disease, is required.

Furthermore, cotton is not the only harmful substance that people continue to breathe in in the workplace. IOSH’s No Time to Lose campaign has been highlighting the carcinogenic exposure issues associated with workers inhaling silica dust and asbestos fibres. The awareness of risks associated with the inhalation of silica dust is even older than that linked to cotton dust, dating back to the Ancient Greeks when the physician Hippocrates noted that miners tended to suffer from breathlessness. Despite this, how silica dust actually causes lung cancer continues to be unclear, and it is estimated that in Britain alone, around 800 people a year die from lung cancer caused by work-related silica exposure. In addition, despite the fact that the use of asbestos is now banned in the UK, it is still present in materials in so many buildings that approximately 5000 people die annually from being exposed to asbestos at work.

If you need advice and support around developing management systems for hazardous substances, including dust, silicates, etc., gives us a call on 0141 244 0181 or visit our consultancy page.