Horrible Health and Safety Histories: The Invention of the Railway

The invention of the steam locomotive in 1804 led to an entirely new industry and a vast variety of new workplace risks. The first railway line to allow a steam locomotive, built between Stockton and Darlington and opened in 1825, followed by the first inter-city passenger railway introduced between Liverpool and Manchester only five years later, led to the creation of many private railway companies and a massive influx of people wishing to invest in railroads. This then led to what was referred to as the ‘railway mania’ between 1840 and 1850 which saw an entire network of railway lines to connect many of Britain’s cities and towns being laid. 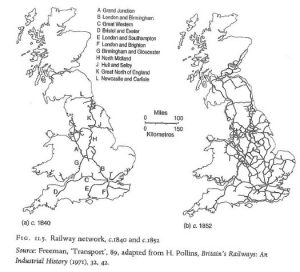 The creation of this network came at a high cost for many of the workers employed to build it. In 1846 a Select Committee of the House of Commons found that in two years constructing a 2.5 mile-long stretch of railway line 7 workers had died, four by the bursting of a drift mine, one by falling down a shaft after a rope broke, one after falling from a house being knocked down to build the railway line, and another after falling out of a bucket pulling him up from a shaft. Between 1835 and 1839, as the railway between London and Birmingham was built, the General Infirmary in Northampton alone treated 121 accident victims, mostly for broken bones. Dislocations, amputations, and cuts were also frequent. As gunpowder was used for blasting, railroad construction workers also risked burn injuries or potentially even impalements by their tools. One man, Phineas Gage, had his tamping iron shot through his head, entering below the eye and exiting the top of his head, and yet survived. Another man, Henry Lacy Pomfret, was killed instantly by a similar accident.

Once the railway lines were built, there were serious hazards for those who worked and travelled on the trains. Statistics collected by the British government showed that between July and December 1855 out of a work-force of around 22,300 people, 63 were killed on the job and 54 were injured. Indeed an article in The Saturday Review in 1870 went so far as to say that ‘Scarcely a single day now passes without a railway accident’. Until the invention of automatic braking systems in the late 1870s, it was the job of brakemen to manually apply the brakes on trains by climbing over the cars. This system not only endangered the lives of the workers but of everyone else on the train and even on other trains on the tracks, as it caused trains to have braking distances of 800 to 1200 yards. Derailments were common due to broken rails or collapsing bridges, although these became less common as steel replaced iron to construct railway lines. At times, as in the case of a train crash in which Charles Dickens was involved in 1865 in which 10 people died and 50 were injured, accidents were caused by work being done on the lines of which the driver was not made aware. Wheels, axles and coupling-chains would sometimes break, or carriages would catch fire. 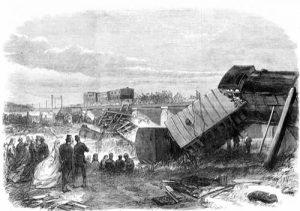 As the Saturday Review noted, however, in many cases accidents were caused by ‘one train getting in the way of another’. Such accidents were so common that in 1852 when Punch, a satirical magazine, ran an issue in which they changed the words to popular nursery rhymes to make them about the dangers of railway travel, their versions of Hickory, Dickory, Dock and Hush-a-by Baby were both about train collisions.

Hush-a-by Baby:
Rock away, passenger, in the third class,
When your train shunts a faster will pass;
When your trains’ late your chances are small –
Crushed will be carriages, engine, and all.

While the railway brought with it the use of a standard time system in Britain (prior to this each town and village had used its own local time) so that passengers could use trains timetables to predict when trains would arrive and depart, train schedules were tight and frequently changed and the smooth-running of the system relied on many individuals timing things correctly and communicating effectively. Long stretches of single track before the invention of automatic electric signals meant that signalmen had to carefully time the passage of trains from signal boxes placed at intervals along the line and notify the adjacent boxes. If a train broke down or stopped out of sight of one of the signal boxes, however, there was no way to tell, meaning that trains ran the risk of being collided with from behind.

This was what happened in the Clayton Tunnel crash in 1861 after the stationmaster at Brighton station allowed three trains to leave within 7 minutes of each other. A fault in the signal box before Clayton Tunnel caused it to continue to signal that the line was clear after the first train had gone into the tunnel. When the signalman noticed the fault, he waved a red flag at the second train, causing the driver to stop the train in the tunnel. As the signalman was not sure if the driver had seen his flag, when the signal from the box at the other side of the tunnel came through saying that the tunnel was clear again he thought both trains had gone through, and signalled the third train to enter, where it collided into the back of the previous one. 23 people died, and the stationmaster at Brighton was charged and found guilty of negligence. 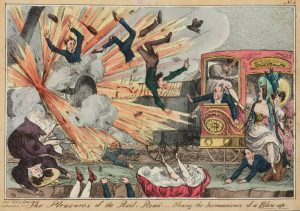 If there was a change to the scheduling, it was the job of conductors to inform the train drivers, however, this did not always happen. This was the case in August 1846, when John Stevens, an engineer, was driving his train in the United States when, due to an uncommunicated change in another train’s schedule, his train collided with another coming in the opposite direction. Stevens was ‘greatly scalded, bruised, lacerated, hurt and wounded’ and was permanently ‘sick, sore, lame and disordered’.

In the case of John Stevens, he sued his employer and the case went all the way to the Supreme Court. Like in the Clayton Tunnel accident, as well as many other work-related injury claims at this time, however, it was ruled that the fault lay with another employee, a conductor who had not relayed the information about the schedule change, not the employer, and so the railroad directors were not required to pay any compensation.

In such court cases, it was usually argued that in taking the job workers had accepted the ‘ordinary risks’ associated with the post, and if those risks had changed but the employee had continued to work then they had consented to the new arrangement. Until the 1870s, an injured employee had to prove that they had been injured by the employer and that neither they, nor any of their coworkers, could have done anything to prevent the accident. As historian Jamie Bronstein explains, ‘Getting clobbered’ tended to be considered ‘evidence of being negligent’.

This meant that while employers would sometimes pay a small amount towards medical bills out of charity, the brunt of any expenses were paid by the families of the injured and charitable organisations. In the 1850s many railway companies began to require their employees to join a benefit fund, where employees would pay an annual subscription which would give them a limited one-time payout or a weekly payment in the case of an accident, placing the responsibility on the workers to be prepared for any potential accidents. 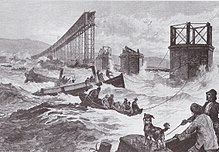 Tay Bridge collapse in 1879 as a North British Railway passenger train crossed it in a storm, resulting in 59 deaths.

As the lawyers of injured workers often pointed out, this meant that workers on the railways were not entitled to the same compensation that passengers were, even if they were injured in the same accident. The passing of Lord Campbell’s Act in 1846 meant that the family members of passengers who had died in a railway accident could claim compensation from any worker whose negligence was seen to have caused it, however, very quickly this led to family members claiming damages from the railway companies themselves. By the 1860s, the railway companies lost almost every personal injury claim made by a passenger or their family that went to court, and chose to settle many claims out of court to try and limit the amount of compensation they might have to pay. In reports of railway accidents in newspapers and the periodical press the focus tended to be on the passengers, not on the workers, and the blame was often placed on the employees. Indeed, an article in Temple Bar in 1861 on the causes of railway accidents argued that railway safety would be greatly improved if ‘railway servants all over the country can be rendered more trustworthy and more vigilant’, arguing that if ‘the general manager, the locomotive superintendent, and the resident engineer’ were ‘held personally responsible for every accident occurring under their management’, passenger safety would be greatly improved.

How far we have come in the past century in improving worker health and safety is demonstrated by the fact in 2015 there was not a single workforce fatality on British railways.

Tune in next week to find out about the weird and wonderful health problems that were believed to be caused by railway travel in the nineteenth century, which included a forgotten condition called ‘railway spine’ and madness!